Public art continues to play a significant role in how we reimagine our cities and projects. Layering experience on top of that builds community as part of the overall value proposition.

Carmen Zella, Founder & Chief Curator of NOW art, not only curates’ magnificent art installations, but she also curated an esteemed panel of experts who share their unique experiences using public art as a catalyst for revitalizing communities including several ways to measure engagement.

Thomas S. Ricci, Managing Principal, Coretrust Capital Partners, LLC explains their philosophy of architecture as art, part of a Class A trophy experience. Every project Coretrust develops has an art component that enhances the built environment which in turn enriches the overall experience.  This was never more true as they began the revitalization of FourFortyFour South Flower skyscraper formerly known as the Citi building.  When the building was originally constructed in 1981 it had five internationally acclaimed artists secured to create public art throughout the structure. Coretrust not only reinvigorated the original art, but also augmented it with another five art pieces, reestablishing the building as the center of public art in downtown LA. The art afforded Coretrust the ability to attract higher quality tenants. The original artworks were refurbished as necessary including the Mark diSuvero iconic piece which was repainted and relit. 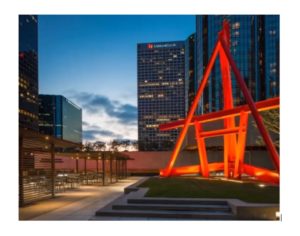 LA based artists were selected to enhance the art and build community. Coretrust found that digital art was somewhat of a nuance to the City of Los Angeles and approvals were challenging because public art, especially digital was an unknown entity and city policy had not yet been established.

Elizabeth Leister, Digital Media Artist, Assistant Professor & Option Head, Emerging Media Production, California State University at Northridge shares some of her digital projects including the All Her Bodies Virtual Reality (VR) experience appearing in several film festivals which is now being transitioned to augmented (AR) reality so attendees can be more participatory. In order to see AR you need to view it through your phone after downloading an app.

Times Square electronic media offers a built-in infrastructure which demonstrates the ability to work with existing infrastructure on a massive scale, such as Midnight Moments, which synchronizes 92 digital displays for 3 minutes every night  of the year.

Interactivity further draws the audience into participating as they activate the art. “Life Forces” by Tin and Ed at Rockefeller Center responds to visitor movements using emerging technologies including 3D scanning and human body tracking from flooring in front of the piece which directly impacts the movement inside the digital art.

Teacups by Leon Keerhelsingborg, in Sweden is an example of Augmented Reality (AR) using large scale murals to launch the digital content. The teacups topple after the viewer downloads the app and views it through their phone. Signage and communication play a vital role in ensuring the audience knows how to experience the AR. 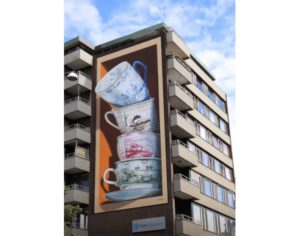 Unlike Tom Ricci’s experience with permitting digital art, which was complicated due to its complexity, AR is relatively simple because it is basically a mural. It only activates after the audience views it through their phone.

Much of the work in AR currently focuses on social justice like the KINFOLK Movement project that uses AR to correct the scarcity of monuments to historical leaders of color. Movers and Shakers creators, replace the statue of Christopher Columbus in NY’s Columbus Circle with Haitian Revolution leader Toussaint Louverture. 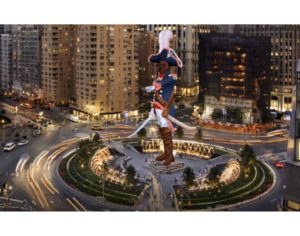 Augmented Reality extends the art experience beyond audiences who may regularly attend galleries.  AR is for everyone and continues to drive community engagement and activate public spaces.

Dan Herman, Senior Associate Principal, Skidmore, Owings & Merrill shared their concept of elevating the 1111 Sunset Towers architecturally, while using murals and landscaping to create publicly accessible open space and views of downtown, known as The Hill. The transformation of this building emphasizes community due to its location at the epicenter of several different neighborhoods.  Neighbors are very receptive to the project which provides publicly accessible open-space and a new gathering place for all residents. 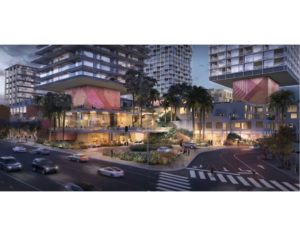 The Pen Factory is a 1000-foot-long building on Olympic Boulevard that is being reimagined as creative office space, by cutting it in half and adding a super graphic along the wall of the building that represents pen lines that curve and overlap. The design pays homage to the history of the building and adds a decorative element to the massive structure. 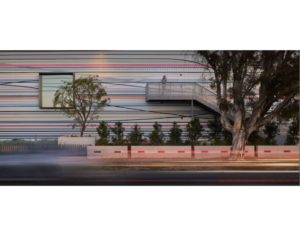 Sunset La Cienega Hotel had a public art requirement.  To maintain the community connection, Janet Echelman, a local artist was engaged by the developer. Echelman is renowned for her large-scale nets that hang above public spaces. Engaging with the artist early in the process is critical for establishing structural engineering requirements and demonstrates a greater sense of collaboration between art and architecture. The net is draped between the two hotel towers creating a public view terrace. Guests regularly request rooms that face Dreamcatcher, illustrating the importance of the public art piece in drawing guests to the hotel. 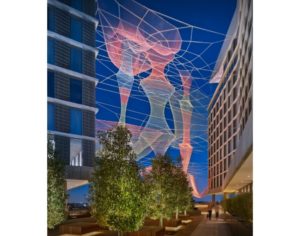 Ryan Granito, VP Real Estate, at Fundrise is reimaging the neighborhood along West Jefferson between Crenshaw and La Brea to include multifamily residential, creative office, restaurant, and retail space. Public Art attracts tenants and residents to the neighborhood and helps position it as a trendy new spot to live work and play. Giving new life to existing older buildings and adding a mix of public art including murals, AR, sculpture, landscaping, and graffiti walls makes this a unique revitalization project. 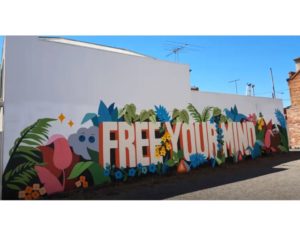 To learn more and watch the entire webinar click here.