October 7, 2021, more than 50 attendees participated in a robust conversation about measuring the value of public art moderated by Carmen Zella, Founder & Chief Curator, NOW Art. The panel was made up of Adam J. Fowler,  Director of Research at Beacon Economics, who addressed the social, cultural, and economic impact of public art with an emphasis on the LA Region. Kevin Davey, Director, USA Urban Art Projects (UAP) shared best practices and case studies of public art projects nationally and internationally to illustrate different ways to measure the return on investment, and Ellen Riotto, Executive Director, South Park Businesses Improvement District shared examples of public art that creates a sense of community and economic vibrance to a relatively young residential area in downtown Los Angeles. 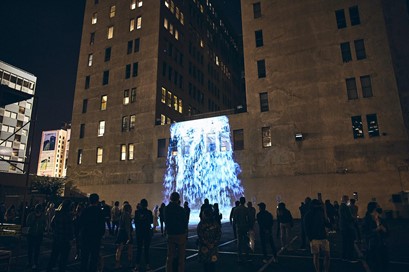 LuminexLA – Los Angeles
As we watch public art becoming more of a staple in development, we need to ensure the power of its impact on urban environments is not understated and the dots can be connected between beautifying a space and seeing a return on investment.

Historically measuring the value of public art has been anyone’s best guess. Now we have data and insights to ensure developers can integrate public art into a project and show its value on a proforma.

Because of LA’s unique characteristics, there is an opportunity to lead the way in pushing the creative overlap of the Art and Real Estate sectors.  The Otis Creative Economy Report illustrates the value to the community when local artists are engaged, another way to look at the value proposition of Public Art. Artists jobs are more prevalent in Los Angeles as is shown by the 8.4% (1,734) increase in employed artists over the past 5 years. There are 224% more artists in the LA Region than in an average region, which leads to a robust talent pool. The artist talent is more ethnically diverse than most regions which mirror the native population and leads to more natural integration in diverse neighborhoods. When artist households are healthy financially their spending goes right back into the community.

In the past 20 years, artists and their related industries have proven to be very powerful in Los Angeles and have seen continued growth with only one slight dip during the recession. Commercial real estate permitting bounced back relatively quickly after the recession while also looking for ways to differentiate with artists’ collaborations through added amenities, programming, and curated experiences, further demonstrating the power of the intersection of art and industry.

Historically economists have been reticent to measure the value of art because there is often NOT a control group, the metrics are not black & white, and there hasn’t been much interest – until recently. As robust public art programs continue to be a mainstay in development so will the development of stronger metrics. Today the real estate industry remains at the lower end of Los Angeles industries that engage with creatives, as that grows so will the economic variables and measurable metrics. Because artists enhance the design, production, and marketing of products they also increase productivity and earnings in the economy. Art and architecture are points of differentiation that continue to increase value.

Measuring the results of the physical installation can be as simple as using billboard metrics, which is essentially a glorified gallery piece. Foot traffic continues to be an effective way to measure ROI based on the numbers before and after the public art impact.

Urban Arts Project (UAP) understands the need to have an industry benchmark in quantifying and qualifying the value of public art. To realize significant ROI, it’s critical for the art, architecture, and landscape, to work together as one and start early in the development process. Then public art becomes the gift that keeps on giving in real estate projects.

As measuring the benefit and economic impact of public art continues to become more important the world’s first holistic and comprehensive research tool, Public Art 360, is being developed by UAP.  Public Art 360 is an open-source platform where categories of impact from public art can be evaluated. Placemaking, society, culture, economy, sustainability, well-being, wisdom, and innovation are some of the categories that are being considered. Developers continue to explore the measurement of public art assets as illustrated by CBRE’s study on Public Art.

UAP’s examples of measurable value created by public art include:

Jackalope by Emily Floyd – Floyd was tasked with creating an iconic arrival moment for the new Victoria’s Morningstar Peninsula, Australia hotel and their brand which builds on the concept of alchemy. Early involvement allowed UAP and Floyd to be fully integrated into the brand development through architecture and landscape as well, which further strengthened the connection of the brand to the community it serves. The hotel won countless design awards and was fully booked on and off-peak pre-pandemic. Not only do hotel images portray the iconic sculpture Floyd created but it continues to be the visitor’s choice for photographed moments. 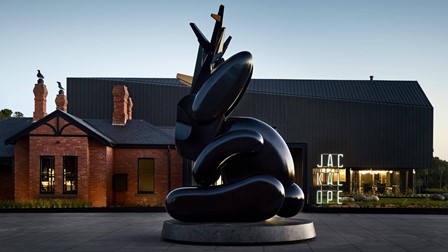 Jackalope – Australia
Rumors of War by Kehinde Wiley – The Virginia Museum of Fine Art was looking for a way to challenge the thinking about confederate statues and start a discussion around diversity and equality. Rumors of War was first unveiled in Times Square to more than 5000 attendees and millions around the world. Times Square Arts had ambassadors interacting with the public during the installation which not only provided Security, but they were also able to gather information about their visitors/tourists to develop benchmarks and statistics.  After three months the sculpture was dismantled and permanently installed in Richmond, VA. In 2019 Rumors of War was the most shared and liked public art project across all social media, nationally and internationally. 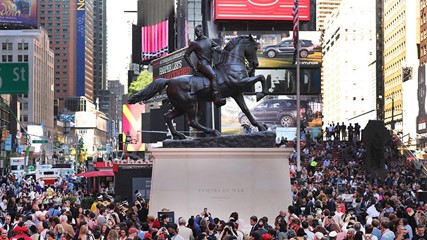 Rumors of War Unveiling – Times Square. Currently located at The Virginia Museum of Fine Art
UAP works with the Times Square Arts and other not for profits to continue to push inclusivity and social justice as public art in temporary or permanent installations during this important generational moment. Across the globe indigenous people are telling their stories and there is more interest in permanent installations that encompass that message.

Speaking Willow by Rafael Lozano-Hemmer – This piece was designed to be the gateway entrance to the recently opened Planet Word Museum in Washington DC. Rafael is renowned for his interactive sculpture focusing on audience participation. Galvanized steel tubes are the willow branches that house hundreds of data cables that are attached to speakers and lighting that are activated when people pass by. The sound that plays from each branch includes quotes from famous speeches, poems, and other spoken words in different languages. The modern Speaking Willow compliments the historical renovation of the Planet Word Museum and has become an iconic gathering place and destination. 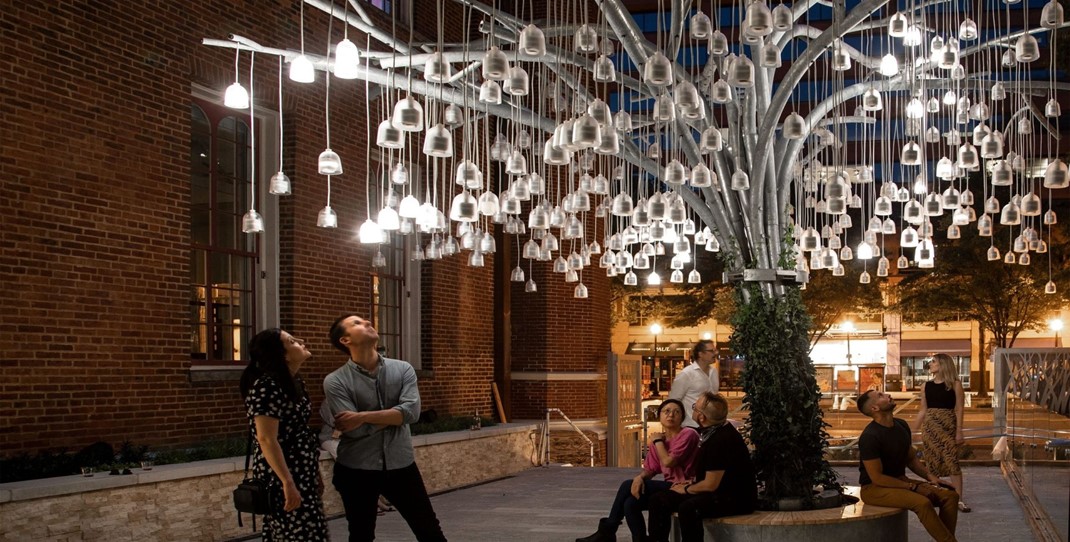 Speaking Willow – Washington DC
Movement of Codes & Breathing by Layers by Ding Yi – One Shanghai Place, a Hines Development project in a historic neighborhood, engaged UAP to create a public art strategy that was rolled out over many years as phases of the construction were completed. Ding Yi was selected because he is a local artist and connected with the neighborhood. His work is a compilation of architecture, light, and signage creating a memorable moment in downtown Shanghai.

Millennium Park – Chicago
South Park Business Improvement District (SPBID) In downtown Los Angeles has seen public art shape the community by touching the lives of businesses and residents, while also defining the character of the neighborhood. South Park is a 52-block quadrant of Los Angeles that encompasses LA Live, Staples Center, and the Convention Center, but also the largest growing population of residents in downtown LA. Currently there are 39 mixed-use projects in the pipeline further cementing the growth of the South Park neighborhood. With the current residential population tripling since 2000, the built environment must reflect community needs including crosswalks, trees, open space, and amenities.

SPBID applies a holistic approach between economic success for businesses and pedestrianization. Positive economic impact is visible as walking paths are developed and businesses reap the benefits of the walkable downtown community.  Every improved pedestrian experience equates to a positive impact on small businesses.

At the beginning of the pandemic sidewalks were key to help residents who live in apartments and condos, safely go out for air, while energizing the neighborhood, and promoting small businesses.  Using removable chalk, games were painted on the sidewalks to create social media interactions with hopscotch, The Floor is Lava, and a big maze, to name a few. Contests ensued and gift cards to local businesses were won by residents.

Because the neighborhood is sometimes difficult to navigate for pedestrians, public art is used to help with wayfinding by creating landmarks to assist with circulation.  Utility boxes were also used to help by being branded South Park and applying directory maps on the fixtures. 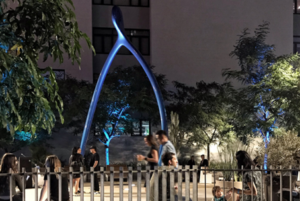 Wishbone – Los Angeles
Public art has been a key component to building community in South Park while enhancing safety and economic growth. Public-Private Partnerships have enabled organizations like MAC Real Estate Group to build a pocket park and install the Wishbone Sculpture. Muralists have brightened the public walkways with native art and murals paying homage to local sports heroes (catering to the Staples Center and Entertainment audiences).  Local parks are sites for paid live music performances as an extension of the arts, while even a parking structure renovation integrated murals on the exterior and retail spaces along with the lower level, keeping the sidewalk fresh and active. 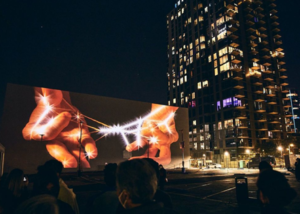 LuminexLA – Los Angeles
LuminexLA, a public art pop-up installation, spanned the entire South Park area, helping to safely transition the neighborhood, city, and region during the 13th month of the pandemic. This one-night event brought 16,000 people into the neighborhood and prompted a positive economic impact on the businesses and restaurants.

Factors to consider Public Art as a Value Proposition:

If you would like to have your public art project included in the early development of Public Art 360, contact Kevin Davey.